HOBAS Pipe USA’s potable water pipes and joint gaskets have been tested by the National Sanitation Foundation (NSF) in Ann Arbor, Mich., to meet their Standard Number 61 and were found to comply. The NSF/ANSI Standard 61: Drinking Water System Components – Health Effects, is the nationally recognized health effects standard for all devices, components and materials that contact drinking water.

Additionally, these pipes are manufactured in accordance with and meet the performance requirements of AWWA C950, Fiberglass Pressure Pipe Standard. The water pipes are suitable for many types of installation including open cut (direct bury), slip lining, jacking or microtunneling, tunnel lining and aboveground.

Hydraulically Efficient in New Orleans
The pipes have been used in a number of places. A notable one was New Orleans for an Emergency Water Main Replacement. Boh Brothers Construction Co. sliplined 1,000 feet of 36-inch, 125-psi pressure class, 46-psi stiffness class pipe into a 48-inch cast iron line that was nearly 100 years old.

The 36-inch liner pipes were reconnected at both ends to the 48-inch cast iron pipes using steel reducers with dresser-style joint seals. This was possible because HOBAS offers a wide variety of mitered and molded fittings as well as pipes with the exact dimensions necessary to connect with ductile iron pipes from 18 to 48 inches.

The pipes were assembled with HOBAS gasket sealed, push together, FWC coupling joints and the new liner passed a three-hour, 100-psi pressure test with no leakage. Many municipalities across the country have an ongoing effort to decrease the operation and maintenance costs of pipelines and preserve infrastructure by using leak free systems.

The Sewerage and Water Board of New Orleans had previously selected HOBAS pipe for a number of projects for several other reasons including its superior flow capacity. The HOBAS potable water pipes deliver significant energy savings due to the low head loss delivered by the smooth pipe interior. With a Hazen-Williams Coefficient of C=155, the calculated loss compared to a rougher concrete pipe or cement lined product can equate to substantial cost savings over the duration of the pipeline’s useful life.

Stopping Leaks at Texas Airport
McAllen-Miller International Airport, McAllen, Texas, recently had a leakage problem similar to New Orleans. The airport, which is the primary business airport of deep South Texas and Northeast Mexico, recently completed a project that included improvements to a water supply channel that traversed areas of Hidalgo County and parts of the airport.

The project was developed after aerial photography identified an area of lush vegetation adjacent to the pipeline. The line had been deteriorating for years, but as the airport continued to grow the time arrived to correct the problem for good. HOBAS partnered with the airport designers and Summit Contracting, Ltd. of Weslaco, Texas, that completed the installation.

Summit used 1,090 feet of 63-inch diameter CCFRPM pipe that was slipped into deteriorated concrete pipe joints under runway 13/31. HOBAS manufactures a flush joint version of potable water pipe that is utilized for jacking and tight-fit relining. It is ideal for these applications because the joint O.D. is the same as the pipe.

Because it is the primary feed for the city’s reservoir, the duration of the project was critical, so only seventy calendar days were allotted for the work. The project was completed a week ahead of schedule.

“We are very pleased with the results, especially since it is directly under one of our runways. We had to close the runway only from 11 pm to 5 am on one evening,” said Matt Lewis, operations and maintenance manager for the airport. CCFRPM pipes’ ease of installation contributed to the early completion.

The 20-foot joints were 60 inches in diameter, 50-psi pressure class and 46-psi stiffness class with push-together FWC couplings. Pipes were installed on a six-inch stable bed, with a gravel embedment to 70 percent of the diameter. They were direct buried with cover depths that ranged from 3.5 feet to about 15 feet, but most of the pipe was installed under 10 feet of cover with HS-20 live load. They are easy to bury because of the reliable performance inherent in their high stiffness design. The lightweight 20-foot sections further reduce installations costs.

The plant piping required several special fittings including branch T’s and elbows, which HOBAS custom-fabricated. The plant will provide drinking water for the cities well into the future.

With the long history of success in the US and abroad, CCFRPM pipes will continue to provide performance benefits in water and sewer markets. The pipes come in diameters from 18 to 110 inches, pressure classes up to 250 psi and stiffness classes of 36, 46, 72 psi and higher. 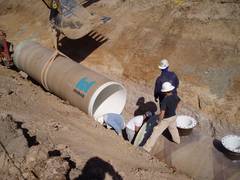 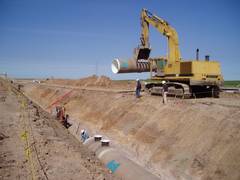 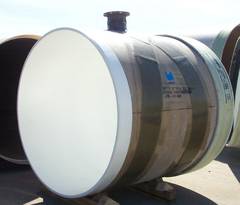