Hobas pipe is being used more than ever to line shafts for large-diameter tunnel projects across the nation. Engineers and contractors are discovering that Hobas pipe’s light weight, speed of installation and corrosion resistance make it an excellent choice for shafts and shaft liners. Hobas centrifugally-cast, fiberglass reinforced, polymer mortar (CCFRPM) pipe is widely used for direct bury, sliplining and tunneling.

An example comes from the City of Los Angeles, Cal., where 78-inch diameter Hobas was used to line three vertical shafts on the Eastside Central Interceptor Sewer (ECIS), reports Bijan Khamanian, western division manager for the company. Several cities along the western coast have chosen Hobas for their risers. The city of Portland, Ore. has used Hobas as shafts from 60-inch diameter to 110-inch diameter on a combined sewer overflow remediation called the Westside CSO Project, and the city of San Diego, Cal., has used Hobas for 54-inch vertical shafts on the 9th Street and B Street projects.

“Hobas comes in 20-foot lengths and gasketed joints so you can stack one in a matter of minutes,” says Khamanian. “When you have to pour concrete for a really deep shaft, it takes forever to build it.

“A concrete shaft 75 or 80 feet deep can take weeks to form, pour the concrete and place a PVC liner for corrosion resistance, but when they use 70 feet of Hobas, we can stack up the pieces in a day or two. So two days versus five or six weeks makes a big difference.”

For the ECIS project in Los Angeles, Hobas cost just 25 percent of the total outlay that would have been needed for forming and pouring concrete for the large-diameter shafts required. “Because they didn’t have to build any forms, and they didn’t have to place any liners inside the concrete, they just used Hobas and backfilled it and got out,” says Khamanian. Although the use has been growing, fiberglass shafts supplied by Hobas are not a new product line. “The San Diego installation occurred over 10 years ago.”

Wastewater tunnels are getting larger and deeper across the country and the use of large diameter fiberglass pipes for shafts is occurring across the nation as well. In the Minneapolis-St. Paul, Minn. area, two large-diameter tunnels, Woodbury L73 and Victoria Intercept Sewer Tunnel, used fiberglass risers, according to Vince Paparozzi, area sales manager for Hobas. “They were about 75 feet deep for Woodbury and 100 feet on the Victoria job. On the first installation, the contractor value-engineered our fiberglass vertical risers in lieu of the concrete structures that they had,” Paparozzi said.

In the second case, the tunnel was manufactured of fiberglass and the fiberglass shafts were originally specified to complete the package. “What they did on the first job was to cut a hole in the tunnel and laminate the Hobas shaft in place to the carrier pipe, 72-inches in diameter, and went straight up with fiberglass. On the second project, Hobas quoted T-base systems with gasket sealed connections. Either option is available depending on contractor preference. Both of these successful installations are for the same owner, the Metropolitan Council of Environmental Services,” says Paparozzi.

“You are talking about concrete risers with their thickness and weight and the equipment to take concrete down deep as opposed to dealing with lightweight fiberglass pipe. And, we have the flexibility to insert the steps or outlets that are needed. Another key issue is corrosion resistance. Instead of using PVC liner or some kind of coating, they can just use our Hobas CCFRPM pipe and not worry about corrosion. The contractor gets the benefit of time and cost and then the owner gets 100-year corrosion resistant design.

“The cost of concrete and a PVC liner may be less if you consider the initial cost of materials only. But the overall cost of material plus installation makes fiberglass pipe less costly than concrete. I think we win many of these jobs because the overall installation makes us a lot less costly. We are saving the contractor money by using the lighter weight fiberglass versus concrete, which requires special equipment and is more time-consuming.”

Cliff Henderson, the Ohio Valley area sales manager for Hobas, reports that he has supplied fiberglass pipe for shafts on two large-diameter tunnels, one in Columbus, Ohio, and the other for Sanitation District No. 1 of Northern Kentucky. Columbus used 96-inch diameter fiberglass shafts while Kentucky utilized 66-inch and 85-inch diameter risers.

On deep tunnel projects, corrosion resistance is a major concern, as many systems are designed with storage. Combined storm and sanitary sewage is often stored in the tunnel after a big rain event. As the rain subsides, the sewage is gradually released for treatment. Storage causes the sewerage to create hydrogen sulfide, which is very often released at manholes due to turbulence – so the shaft must resist corrosion as well. For the Kentucky project, officials wanted a pipe that would stand up to a 130 psi of water head and 50 psi additional rock pressure. Plus, Kentucky officials wanted a pipe to resist hydrogen sulfide as well.

Gary Bulla, P.E. of McNally Tunneling, was the project engineer for both the Ohio and Kentucky projects. Bulla likes using Hobas for shafts he says, “Because it is a quality product, light weight and can be modified or repaired in the field.”

Hobas pipe comes with push-on joints. “Installers like the pipe because they fit up. Our joints are dimensionally consistent and they fit together easily,” says Paparozzi. “The overall installation is easier because you are not dealing with all that weight of concrete.

“So for the ease and low cost of installation that come with the lightweight of fiberglass pipe, specify Hobas. You’ll also get corrosion resistance that is proven to last a lifetime.” 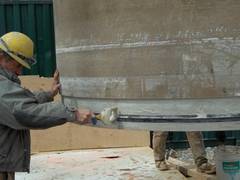 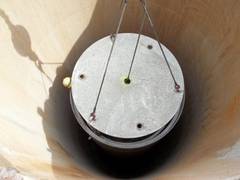 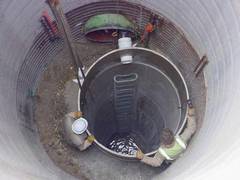